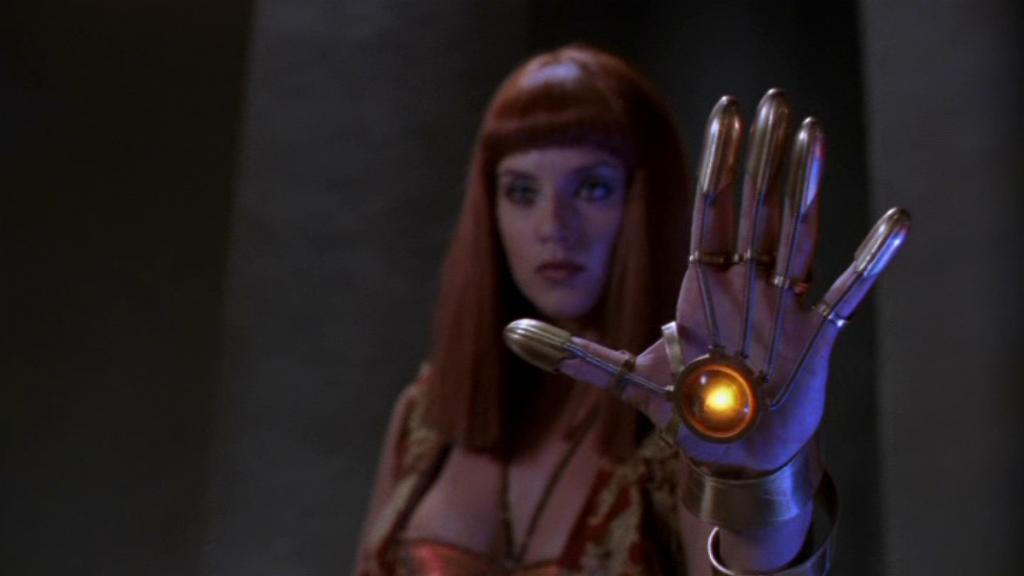 A weapon used by Goa'uld, also known as a "ribbon device." The device is a useful means of interrogation and can inflict great pain. It is capable of emitting a powerful blast of energy to send a foe hurtling across the room. It is also capable of directing a much less intense, yet very deadly, ribbon of energy -- usually directed to the victim's forehead. Extended exposure is lethal.

The device works largely through the user's thought or emotion, theoretically allowing the user to communicate a message to his or her victim, if held in an extended "grip" of less intense energy.

The user must have naquadah in their bloodstream to make the device work, limiting its use primarily to the Goa'uld and Tok'ra.

Thor's Chariot - After the death of a Tok'ra symbiote inside her, Carter learns she has the ability to use the hand device.
Into the Fire - Hathor attacks a Tok'ra spy in her ranks with a hand device.
Seth - Carter uses the hand device to kill the Goa'uld Seth.
Forever In a Day - Sha're uses her symbiote's (Amonet) hand device to trap Daniel Jackson in his own subconscious and communicate with him.
Revelations - Osiris turns her hand device on Sam Carter, before the Asgard beam her away to safety.
Evolution, Part 2 - The Goa'uld Thoth tries to use his hand device on intruders on Tartarus, but is killed by Carter and Teal'c before doing so.
Chimera - Osiris uses a hand device to subdue a sleeping Daniel Jackson, so that she may freely use the Tok'ra memory device to infiltrate his dreams.