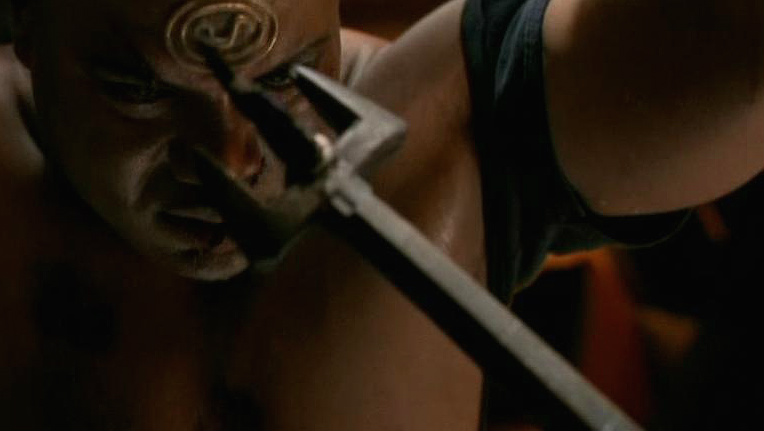 A three-pronged, rod-like weapon, also known as a "fire stick." The Goa'uld device is slightly under half a meter long, and is capable of delivering a powerful jolt of energy when in contact with an individual. Its primary use is torture. When the weapon is in use, the eyes and mouth of the individual being tortured ignites with bright light, reflective of the excruciating pain being inflicted.

Point of View - In an alternate universe, General Hammond is tortured by Apophis with a pain stick.
Jolinar's Memories - Hidden Tok'ra memories surface as Carter realizes Jolinar was badly tortured by a pain stick at the hands of Sokar.
The Serpent's Venom - The Goa'uld Terok tortures Teal'c, trying to record his "repentance" in order to undermine the Jaffa resistance movement.
Beast of Burden - SG-1 discovers a colony where Unas are kept under control by pain sticks (among other devices).
The Sentinel - O'Neill is tortured by Svarog's Jaffa to influence SG-1 to drop the forcefield to the Sentinel.
Ex Deus Machina - The Jaffa leader Gerak orders his lieutenant, Yat'yir, to use a pain stick -- the former weapon of Goa'uld oppression -- on a captured Goa'uld.